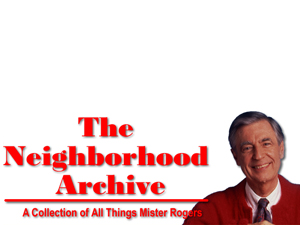 Tim Lybarger launched The Neighborhood Archive in 2008 as “a web resource dedicated to one of the most influential icons of our generation.” His site has become a definitive resource for all things Mister Rogers: episode guides, collectibles, character descriptions, order information, message boards and more.

This weekend, Tim and I spoke at length about meeting Mister Rogers, making “Mister Rogers & Me,” early screenings and future plans for the film. It was a deep and wide-ranging conversation with a few, small scoops, and some insight on the bigger ideas we endeavor to communicate through the film. Here is a brief excerpt of my remarks to Tim:

I don’t know if you know the artist Chuck Close. He makes these amazing, huge portraits that are maybe twelve feet high comprised of small images of different shapes and sizes. So if you’re go way back you see the portrait, and if you’re close you see the individual images.

That’s the way I think of the movie. In a perfect world, that would have been the poster and DVD cover. It would be comprised of all of the people Mister Rogers touched. So if you were up close you’d see thousands of people, photos of him with his fans, and fans with their memorabilia, and if you backed up you’d see Mister Rogers.

As we’ve made this movie we’ve met hundreds of people who are moved in their own way to take their own action which is the idea, right? The ideas is that we all affect each other. In little ways and in big ways maybe we can change the world more deeply, more simply, more-positively. Taken together, it adds up to something even bigger.

We will have much more information about the release of “Mister Rogers & Me” in the coming weeks. Meanwhile, many thanks to Tim. And do have a listen to the entire interview.