Mister Rogers: ‘Look For The Helpers’ In Times Of Disaster 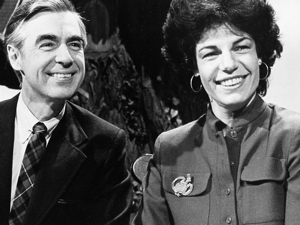 As Americans wrestled with the unthinkable murder of some twenty first graders last week, Mister Rogers’ sage wisdom returned to provide a deep and simple salve.

“When I was a boy and I would see scary things in the news,” he said in a highly viral image “My mother would say to me, ‘Look for the helpers. You will always find people who are helping.’ To this day, especially in times of ‘disaster,’ I remember my mother’s words, and I am always comforted by realizing that there are still so many helpers — so many caring people in this world.”

NPR’s Susan Stamberg began calling on Mister Rogers’ deep and simple wisdom in the 1980s. Here is an excerpt of our 2006 interview with her (viewable in its entirity on the “Mister Rogers & Me” DVD).

We here at National Public Radio deal with life’s realities and the hideous and horrible events of the day. Fred did too in a way, he wouldn’t push that aside, and I would repeatedly call him when there was a terrible tragedy — the crash of the Challenger Shuttle for instance, or attempted assassinating of President Ronald Reagan — and put him on the air and say, “What should we tell our children about this?”

And so he always understood — though he created that make believe world and that Neighborhood that existed in his mind and the mind of all of his young viewers. Nonetheless he was always aware of the world around us, and did everything he could to help children connect with it and understand it.

So whenever I would call him in that way in the middle of some of the worst events it seems of this country his answers were always so useful. Telling the truth to children, but in ways that they could understand.

He knew that I was really scared and that fear came from the child inside you. It’s not so much a grown up thing. It goes way back. And so does sadness. So do the deepest emotions. And he knew that. And he spoke to that in everybody, in everyone he dealt with.

I heard the news from a dentist’s chair Friday afternoon. Given our nation’s track record with gun violence (I wrote about Mister Rogers in the context of the Aurora Shootings just five months ago), I wasn’t terribly surprised. As the father of a two-year-old and six-month-old, of course, I was sickened and saddened. This time, my children were too young to understand, let along know about this horrific news.

Hours later, though, as friends, family and “Mister Rogers & Me” viewers began emailing, Tweeting and posting this iconic image and quote, I was grateful that his words still resonate so soundly, and that was helping us still.

259 thoughts on “Mister Rogers: ‘Look For The Helpers’ In Times Of Disaster”