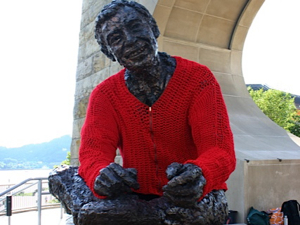 The artist (an freelance writer, Etsy shop owner, Today Show craft maker, craft book author, and college tour copywriter who confesses that she drinks a lot of coffee and doesn’t sleep a lot) counts her primary influences as “people who combine education and good will with fun and creativity: Mister Rogers, Jim Henson, Dr. Seuss.” When approached by an arts organization in 2011 to wrap the statue in a sweater reminiscent of the iconic ones worn on “Mister Rogers’ Neighborhood” (all knit by his mother), Alicia jumped at the chance. “I was pretty much born to do it,” she says.

When the opportunity to pepper her with questions was availed, I jumped at mine. Here’s our exchange.

BW: What are you first memories of Mister Rogers?

AK: I was born in 1981 and grew up in Pittsburgh, watched the show a lot as a kid, and was aware that he was *in* Pittsburgh as well. I was so captivated by everything that happened in the show, from the interactions with the Make-Believe characters to the adventures, like visiting a toothpaste factory or a crayon factory. (Maybe he is why I got so interested in factory tours ever since I was a young adult? Every object I see, I think, *this* was made somewhere–but where? How? Can I go there and see it being made???) When I was watching the show, I felt like I was there, that he was talking specifically to me, that we were friends.

BW: What was your sense of him in the community?

AK: Everyone I knew in Pittsburgh loved him and loved the show. I think he was a genuine source of pride in the city, that he was creating this long-running popular show right here! And he still is a source of pride for Pittsburghers; there is still a fair amount of programming at places like the Children’s Museum that is Mister Rogers-themed. And an exhibit at the airport! There is the sense that he is part of each Pittsburgh family, and I imagine he touched people in that same way beyond the city lines.

BW: Did you ever meet him?

AK: I did meet him! I met him once at the Children’s Museum. I was very young so I don’t remember what the actual event or program was, but somewhere I have an autographed photo of him. At the risk of sounding saccharine, I recall feeling such warmth emanating from him. Warmth. Sincerity. Love. Joy. Whatever you want to call it.

BW: What inspired you to crochet a cardigan for his statue?

AK: I can’t take credit for the giant cardigan idea. Outpost Journal, a brand-new publication, approached me with the idea after they heard my name tossed around when inquiring about yarn-related people in Pittsburgh. The magazine is a “non-profit print publication on innovative art, design and community action from cities that have been traditionally underexposed beyond their local contexts.” So, each issue focuses on just one city, and they chose Pittsburgh as their debut issue/city, and then they want to have some creative “engagement with tourist attractions.” It sounded like a crazy idea, to make a GIANT cardigan for a Mister Rogers sweater–how does one say no to that?! I’m always up for crazy crochet challenges.

BW: How long did it take? How much yarn?

AK: Long! I worked during the day and then babysat until 11pm every night, so I would work on it after my “charge” went to bed. I don’t even want to know how many hours it took! It took many many, skeins of yarn, and I actually crocheted with 3 strands of yarn together and a giant crochet hook. I have actually, still, never crocheted a human-sized sweater, so the mechanics of such a garment were not exactly in my crochet expertise. (I make very small toy-like things!). I consulted my fashion designer sister once we knew the various statue measurements. Because of the way the statue was made, with his arms against his legs, I couldn’t just “crochet a sweater”; it had to be done in panels and then sewn onto him. The part of the sweater that I am most proud of is the zipper–it’s a real zipper! I ordered it online, and it was made to be used in a sleeping bag. My mom sewed it into the sweater, so it actually functioned as a zipper!

BW: What is his legacy for you? For Pittsburgh?

AK: In my opinion, both Mister Rogers and Jim Henson are two of the greatest people to have ever lived. Mister Rogers combined creativity, curiosity, and a love of humanity in such a genuine and unique way. At the core, he just wanted to be a good person and help others. I have worked with children for a number of years–in schools, museums, botanical garden, daycares, after school programs, camps — and I have a whimsical crochet business and a writing career, so Mister Rogers has definitely been influential in my life. I love when he said, “The child is in me still and sometimes not so still.” Every day feels so full of possibility for me — who will I meet and what will I learn today? 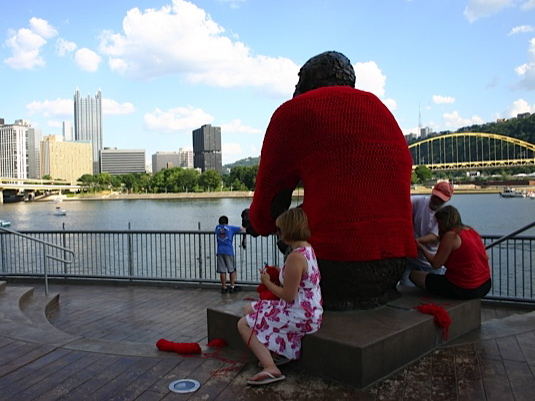 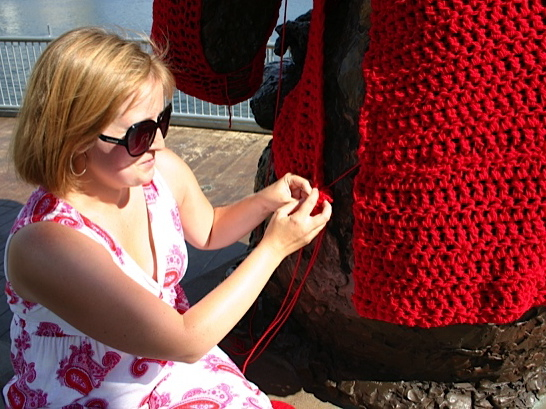 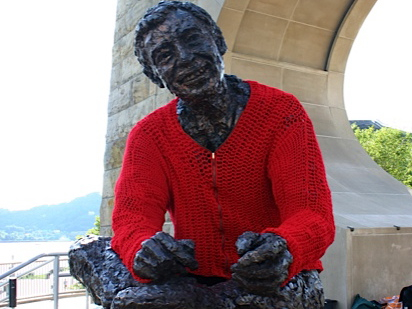