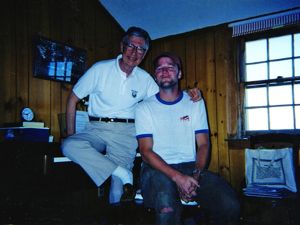 PBS stations from Sacramento, San Diego and Portland, to Cleveland, Madison and Des Moines will celebrate Mister Rogers’ 86th birthday and enduring legacy with premiers of “Mister Rogers & Me” throughout the spring.

In all, our documentary will premiere in 19 markets in the next six months, nearly four years after the official “Mister Rogers & Me” premiere at the Nantucket Film Festival, and two years after premiering on 27 PBS stations concurrent to being released via PBS DVD.

Our syndication partners, American Public Television, explained the film’s resurgence thusly: “One of our stations did great guns pledging MR&M on Monday night. As a result, we’re starting to see some add-on activity. A flurry of folks are asking [about] acquisition!”

In the intervening weeks, the 55-minute broadcast version of our 70-minute DVD has been added to 22 cities. Most of the scheduled premieres are pegged to pledge drives. On March 4, I will return to my home state of Iowa for IPTV’s live premiere.

More than a Founding Father of public broadcasting, and Mister Rogers was a critical defender; his appearance before the US Senate in (contextualized in our film) saved funding for the then-nascent Corporation for Public Broadcasting in 1969.

The below station adds all come in addition to WHRO Norfolk, WHYY Philadelphia and WQED Pittsburgh, all of whom have aired the film in the last six weeks. Mister Rogers’ son, John, told me recently, “Dad would be so proud of you.”

Please support your local PBS station, and contact them if you want to see “Mister Rogers & Me” in your neighborhood.