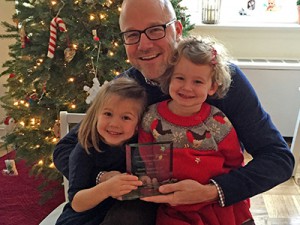 The award was presented at APT’s Fall Marketplace during which PBS stations from around the country gathered to celebrate previously and soon-to-air programming.

The Excellence Award honors “a select few of the best programs distributed last year… for their originality, execution, creativity, scope of content and effectiveness in reaching and engaging audiences.”

“From a chance encounter with the iconic Fred Rogers, Benjamin Wagner’s life as a news producer is transformed. The simple words Rogers spoke — ‘I feel so strongly that deep and simple is far more essential than shallow and complex’ — sent Wagner on a quest which led to the creation of this poignant, award-winning film. This documentary reinforces public television stations’ commitment to quality children’s programming and the importance of media and life that is deep and simple.”

And if you haven’t watched the film, please stream it on iTunes, purchase the PBS DVD, or check with your local listings.